On one day of November,

I brought out some gems and started to sorting colour.

The children were curious and offered to help and I welcomed them.

I used a few glass jars to sort some gems.
Mikayla seems to love to hear the sound when the gems were dropped into the jars.

Caoileann said that she enjoys putting the gems on the pattern,
After that I drew some patterns on paper.

I started to make patterns with gems.

" Can I help you ?" Mikayla asked me, she slowly started to make an alternating colour pattern with the gems. " Green and next is mmmmm..." I know the next is blue! "

And in the afternoon, Royson took an interest in the gems and showed a great deal of focus on the colour and shapes.

These math activities allow the children to explore in open-ended ways. They show creativity and is a much better way for children to learn than worksheets.

I love to watch our children when they are creating. They inspire one another with their beautiful ideas. 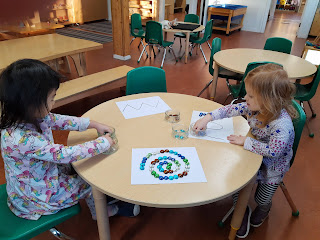 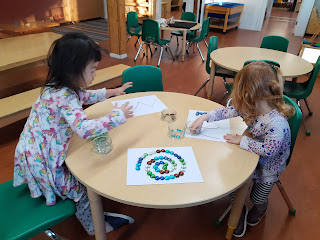 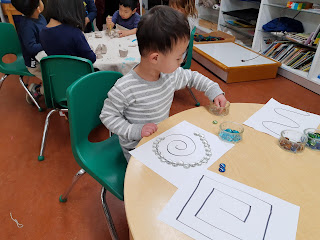 We had Bike Day last week and started by playing with the idea of car wash.

Child " What are you making Naomi?"
Naomi " I am making a car wash machine."
Child " why is it so small?"
Child" I think we can use it for our toy cars"
Naomi: " I thought so"
Naomi " Have you ever gone to car wash with your parents before?"
Child " Yes, I have, my dad washes our car, I help"
Naomi" Do you know what the inside of a car wash looks like?"
Child " I know there is a shower on the top of the ceiling ".

The children got some ideas from our conversation and from their experiences with car washes.

Child " How about we put some brushes inside?"
Child " I saw the curtains in front of a machine"
Child " I love blue curtains"

When we were finished making the car wash the children played happily together with our new toy.

Child "I am going to car wash with my grandma and grandpa"
" My grandma can't drive, so my grandpa will drive"
Child " My grandma can drive, she sometimes drives me to here"

The children noticed we have big cars, they wouldn't fit the small car wash machine.

And then we made a big car wash machine.

I love to playing with the children. These moments help us for strong connections and I love to give them a chance to express their ideas. 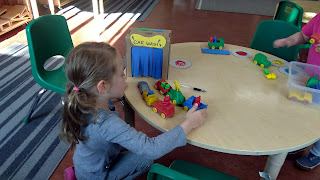 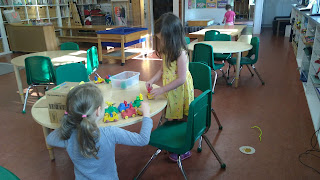 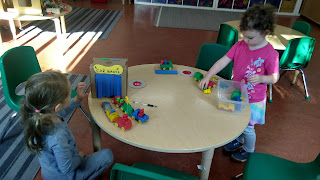 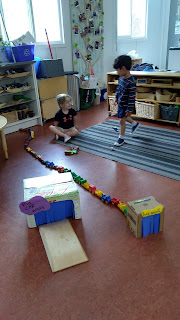 The teachers setted up some activities for this special day.


-Colouring of  Indigenous Art.
-Playing with the idea of the Inukshuk using a variety of building materials.
-Picking Huckleberries and Salmonberries at Pacific Spirit Park and making Jam.
-Making and tasting Bannock.
-Listening to Indigenous Stories (which builds on the story reading we do each day).
We also learned June 21st is the first day of summer.

Before we went berry picking, we thought all the people and animals that eat and use berries.

And we promissed to we pick just a little amount of berries for our baking so that others too may share the lovely gift of the forest.


BUT, when we walked at the forest we noticed almost all of the berries were gone.
We were able to pick it up just few berries.
When we baked we used local blueberries we bought at the store to add to those berries we ha picked.
After rest time, we tasted the bannock and the jam.
We all loved it!


Since the morning, we had used our senses fully; for enjoying of world of Indigenous way of knowing.

Preperation for the concert

Our end year concert is over. It's always something bittersweet.

The children prepared songs and movements since the beginning of May.
Along with the practicing, we prepared things for the concert as well.

As it happens, when we went for a walk in the forest, some children found the skin of dead tree (bark).

The children were curious about the bark and when we returned to the classroom,  we used the internet to help us explore our questions.

We learned that The Coast Salish People have made large mats that were used as room dividers from cattail leaves, kneeling pads in canoes, sleeping mats, and temporary shelters.

Cedar roots and skin of the cedar were peeled and split and used to make hats and baskets.

We decided to make a basket with coloured construction papers.
Each children picked two favorite colours and I taught the children how to alternate the strips as they wove the nice pattern.

The children liked the way I described the process:

The base paper is the dirt, and the paper strips are worms.

The worms will dig into the dart going up and down. Look, there is a space for 6 worms.

But they all need to squished... other wise the 6 worms wont fit in the dirt. "


Weaving helps develop hand-eye coordination and encourages children to use the visual information received to coordinate the movement of the hands. 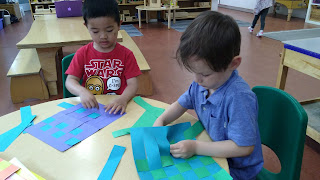 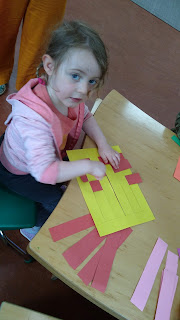 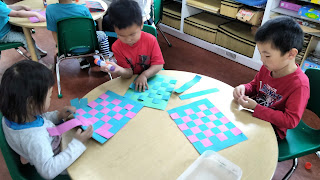 They can't wait to show them to their parents and see the delight when parents read the letter inside.

Three children asked me to cut a big paper heart one by one at free playtime the other day.

10 min later, they showed me their creations.

"Naomi, this is a card. This is a happy heart card. "
"And look inside, there is a grumpy angry heart under... it is hiding."

"Sometimes we are a grumpy heart, but after I play with friends, my friends made a happy heart."

"Now this girl is super happy!"


The happiness of this realization about friendship shows.

I feel so gifted to work with our children. I love them. 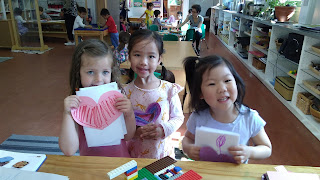 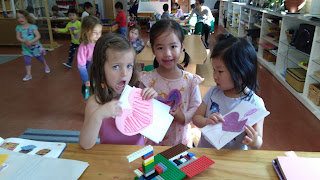 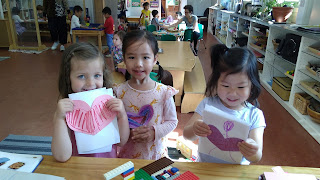 
Last Tuesday, during our rest time, suddenly a fire light blinked in CM.

Each teacher told the children to go outside quick and quietly.


A few mins later, all the children were able to move by the fence which is the meeting place for evacuation.


The big school's teacher told us it was a monthly fire drill.

We talked about why it was important to practice these things to help keep us all safe.


Once a month, we do " Fire Drill" for practicing.
We follow the procedures found in our Fire Safety Policy book.

It was important for the teachers at CM to have this drill come as a surprise because it helps us all know how to act in something unplanned.

Regular fire drill is normally we planned it before that mean teachers wouldn't panic.
But this time, the teachers were not sure what's happened.

The teachers were calm and gently talked with the children.

We needed to wake some children up, because we were in middle of rest time. But they were all calm and quietly to followed our guidance. 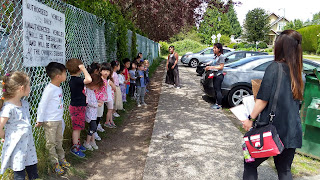 We all proud of our children, they did very very well.

Making a board game

Last month at the group time, the children explored toys from times past.


The children made a board game.

The children came up with many fun ideas for the squares of the board.
They showed the movement and explained to me about their ideas. 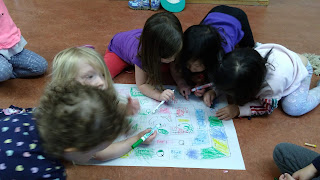 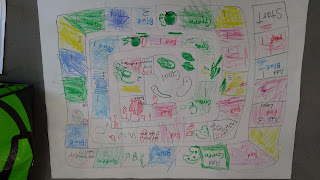 The benefits of board game are many.

Many of the toys of the past are still valuable today.

On one day of November, I brought out some gems and started to sorting colour. The children were curious and offered to help and I welco...